Like many people, I’m rushing to get my flower beds weeded before winter sets in. The weather is great here in the Seattle area, so I’m getting out in my yard daily.

When I was weeding a bed I weeded this spring, I thought it’s time to get some mulch to keep the weeds down. Then, I won’t have to do as much weeding.

I’m allergic to the typical beauty bark from fir trees and other evergreen trees. I’ve used deciduous mulch before, so I called the farm and garden store where I’d purchased it earlier. However, it’s now out of business.

I tried a pet store because the aspen shavings I’d used earlier is sold for pet cages. It seemed expensive at $17.99 for 141 liters. The sales representative said it was a 5 to 6 pound bag. That seemed too expensive at $90 for five bags. .

So, I thought about what my daughter-in-law, who’s a farmer, recommended in the past: straw.

I found some straw at a farm and garden store. I bought 4 half bales because I thought a whole bale would be too heavy to lift. The price was $35. I forgot to ask if it was organic before I picked it up. Luckily, it was. 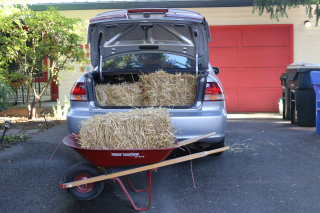 The straw is easy to transport. 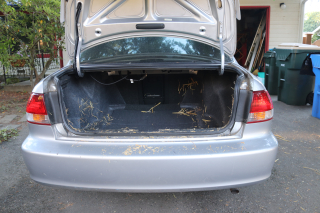 It’s a bit messy, even though I put big trash bags in my trunk to avoid mess. 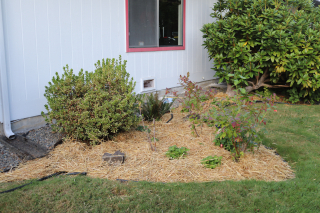 It worked well in my weeded bed. 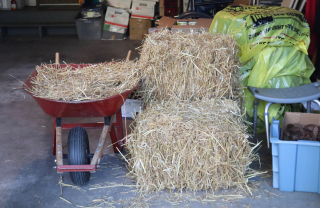 I put it in the garage for storage. My daughter-in-law always talks about getting her hay in the barn before the rains come.

The half bales were light.

It made me wonder about the aspen shavings and the size of the bags. I called the pet store back. The customer service representative weighed one. It was 13.2 pounds.

Hopefully, the straw will work well. It was a good bargain.