Be sure to watch the documentary series ‘LuLaRich’ 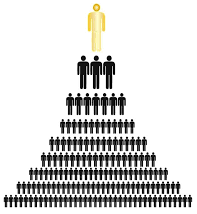 Every consumer needs to watch the documentary series “LuLaRich,” about LuLaRoe, a multilevel marketing scheme that sells colorful clothes and tights. It’s on Amazon Prime and hopefully will be available elsewhere, too.

It shows in detail the thin line between multilevel marketing and pyramid schemes.

Here’s the trailer for the series:

Women had to pay $5,000 to $10,000 to become a seller of the clothes. The company grew quickly and when there was a backlog in getting clothes to new customers, a drawing would be held at one of the lavish conventions. Pandemonium broke out when the early winner was announced.

Women were pressured to do whatever it took to get the money to buy in, including using many credit cards, taking out loans, or even selling their breast milk.

One woman interviewed said husbands were encouraged to quit their jobs and join the business so LuLaRoe would have full control of a family’s finances, making it difficult for participants to quit.

At one point when LuLaRoe was growing rapidly, independent retailers complained the clothes were poorly made, damp, and even moldy. They also complained returns weren't being accepted.

The four-part documentary series also said at one point some women were encouraged to go to Mexico and get gastric surgery for weight loss so they’d look better in the clothes and sell more.

In 2016, LuLaRoe reported almost $2 billion in sales. However, the documentary series contains many tearful accounts of LuLaRoe destroying the lives, marriages, and finances of many women.

The Washington state attorney general won a lawsuit against LuLaRoe, which is still operating on a smaller scale.

The documentary series shows parts of depositions for the lawsuit of DeAnne and Mark Stidham, founders of LuLaRoe, as well as one interview with the couple. They refused to do a second interview for the series.

The 2019 lawsuit filed against LuLaRoe and several of its executives charged that the defendants made unfair and deceptive misrepresentations about the profitability of being an independent retailer for LuLaRoe.

For example, one LuLaRoe executive claimed that “so many of our retailers are making amazing money doing this part time” and “a huge number of people” sell $15,000 to $20,000 each month. Later in the same call, she claimed LuLaRoe has “a bunch of people” that can sell up to $150,000 per month.

Instead of profiting, many of the company’s independent retailers were left with debt and unsold merchandise they couldn’t return without taking a loss, Washington Attorney General Bob Ferguson said.

LuLaRoe agreed to pay $4.75 million to settle the lawsuit, with $4 million going to help people deceived by LuLaRoe.

In addition to paying $4.75 million, LuLaRoe was required to:

As a result, thousands lost money and two individuals made millions from their scheme, he said.

Now, it costs $499 to become a LuLaRich independent retailer. More than 50 percent of LuLaRoe retailers made less than $5,000 from sales in 2020, a disclosure statement on the LuLaRich website says.

The link to the Income Disclosure statement is listed in tiny print at the bottom of the website.

In 2021, LulaRoe still has dozens of unsettled lawsuits against it.

You forgot to mention the several supplier lawsuits--for millions of dollars. BuzzFeed had a very good article on LulaRoe in 2020, including how it seems to have "fractured" the family. https://www.buzzfeednews.com/article/stephaniemcneal/lularoe-millennial-women-entrepreneurship-lawsuits. A good friend had close relatives who got into selling Amway for awhile, they were very strong believers in the mantras/belief system provided by Amway, in the end I don't think they earned much.

I doubt if $4 million will do much to repair the damaged finances of so many women and their families, but I hope it helps at least some of them--at least the court's acknowledged they were ripped off/injured.

I'm so glad that this documentary series was done and that it's getting wide attention from audiences. People need to know that multilevel marketing is a big, big problem, and they shouldn't get involved in these schemes.

I heard a NPR article when the reporter asked why multilevel market was allowed to exist when it is to damaging to consumers. The reply was that the Direct Marketing Association and others who want the money made from MLMs to continue lobby for regulations against it. Like in so many industries, the corporations rule the world.

TV is largely a wasteland, but programs like "LuLaRich" are so worthwhile and inform consumers.