How to clean a birdbath 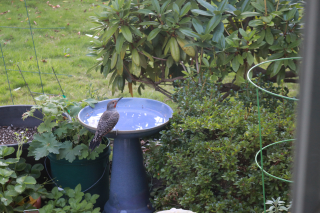 My mom loved birdbaths. She enjoyed growing flowers, and often had a birdbath in her gardens.

A couple of years ago to remember my mom on Mother’s Day, I bought one when I was at the co-op garden store. It was an impulse item.

It’s fun to have a birdbath on my patio and occasionally watch birds enjoying it.

However, I was concerned this spring when a multistate outbreak of Salmonella Typhimurium infections occurred in people that had contact with wild songbirds and bird feeders.

I did an Instagram post and advised people to clean their birdbaths once a week, wear disposable gloves when cleaning a birdbath, and wash your hands when you’re done. Also, don’t let pets play under the birdbath.

However, recently, another question came up. My birdbath is ceramic. It gets dirty and rinsing it out with water from a hose doesn’t get it clean.

I wondered what I could clean it with. When I was a kid, we won a gold fish at a carnival. About a month later, we cleaned the bowl with bleach because the water was turning green. The fish, floating on top of the water, was dead. We were devastated.

I found a kitchen brush that was getting worn, so I used it to scrub out the dirt out of the birdbath. Of course, the brush is now dedicated to cleaning the birdbath only.

A solution of one part distilled white vinegar to nine parts water can be used to scrub a birdbath. Rinse the birdbath well after using the vinegar solution and let it dry. Then, refill with water.