Home About Newsletter Categories Donate
How to prevent mosquito bites
Where should you retire? 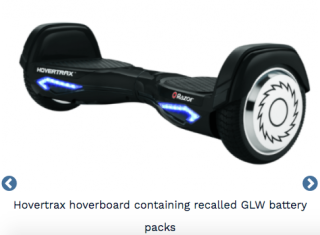 The lithium-ion GLW battery packs in the scooters/hoverboards can overheat, posing a risk of the products smoking, catching fire, and/or exploding.

There have been more than 20 reports of the scooters/hoverboards overheating, including some reports of smoke or fire. No injuries have been reported.

GLW’s battery packs were certified as compliant with ANSI/UL Standard 2271 by UL.

Hovertrax hoverboards have two wheels at either end of articulated dual platforms and are powered by GLW battery packs.

The battery packs have the name GLW written in large letters on the packs. They have serial numbers beginning with GLW, which are printed on a white sticker on the top of the battery pack, below the bar code. Hovertrax 2.0 is printed on the front of the hoverboard.

The hoverboards were sold at Walmart, Target, Toys R Us, and other stores nationwide and online at Walmart.com, Amazon.com, and other websites from September 2016 through 2018. The cost was about $460.

Consumers should immediately stop using the recalled scooters/hoverboards and contact Razor for instructions on how to obtain a prepaid shipping carton to send the GLW battery pack back to Razor, and to receive a replacement battery pack at no cost, the company and U.S. Consumer Product Safety Commission advise.