Remembering 9/11: My view from Spain and Portugal 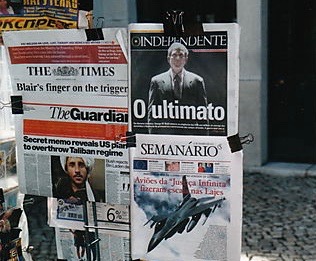 Twenty years ago, on Sept. 11, I was just beginning a vacation in Spain and Portugal with my daughters. It was frightening to be so far from home and not know what was happening.

Here’s the account of my vacation that appeared in The Tacoma (Washington) News Tribune on Oct. 3, 2001:

On Sept. 10, with great excitement, I board a plane at SeaTac for a two-week vacation to visit my daughter Lisa and her husband Rafa in Madrid.

My daughter Mona, from Sacramento, joins me in Philadelphia. What fun to have her company on the long flight to Madrid.

Six hours before the first plane hits the World Trade Center, our plane lands in Madrid.

We change our money, walk in the park near Lisa’s home in Northeast Madrid, and then gratefully crawl in bed for a nap.

When Lisa bursts in to tell us about the terrorist attacks, we’re too groggy to understand how enormous they are. When I wake up two hours later, I’m horrified. We’re glued to CNN for hours.

At first CNN reports an estimated 5,000 dead. Then a government official says it may be 10,000 dead. We watch CNN all day.

Although I enjoy our nice dinner at a neighborhood tapas restaurant that evening, I’m troubled about the attacks and how they’ll affect American life.

Two days later, we head to Oviedo in the province of Asturias on Spain’s northern coast, about a four-hour drive from Madrid.

Mona, a botanist, has an appointment to meet with five weed scientists at the University of Oviedo to share information on an invasive weed she’s researching – cape ivy. From South Africa, the weed causes problems because it chokes out native plants.

The scientists offer their condolences about the American deaths in the terrorist attacks.  After exchanging information, they take us to see invasive weeds. They also show us two pre-Romanesque churches on Mount Naranco.

The next morning, we get a cape ivy tour near Oviedo. Mona takes photos and readings with her GPS (global positioning system), a cell phone-sized device that marks sites through satellite readings.

We leave the Spanish scientists and enjoy Oviedo’s tourist sites. Oviedo’s huge gothic cathedral – a 16th century structure with massive, ornate gilded altars – is magnificent.  We stroll through the streets and watch crowds gathering for a local festival.

After leaving Oviedo the next day, we head west along the coast and enjoy the beach at Aguilar, Cudillero, a tiny cliff town perched at the edge of the sea, and Puerto de Vega’s picturesque harbor. Mona is thrilled to spot cape ivy.

We enter the Province of Galicia and get to our destination, Santiago de Compostela, about 10:30 p.m. We find a nice hotel with television.

On CNN, people are crying about loved ones killed in the terrorist explosions. There’s a candlelight vigil at the Pentagon. Mayor Rudolph Giuliani estimates the number of dead at 10,000, while the police say 20,000.

In the morning when we go to the Santiago Cathedral, I light candles for those who died in the attacks. The cathedral is built around the assumed remains of St. James and has been the destination of pilgrims for centuries.

At Tui, on the border between Spain and Portugal, we cross a one-lane bridge into Portugal and head south along the coast.

Lisa takes a dip when we visit the beach at Moledo, and Mona spots cape ivy. When we get our hotel in nearby Viana do Castelo, there’s no TV so we don’t know what’s happening in the rescue efforts.

Then it’s on to Porto, an industrial town with several beautiful cathedrals, and Aveiro, a city of canals called the Venice of Portugal. We enjoy two beaches near Aveiro.

Our next destination is Lisbon. We pick out a small hotel, with no TV, on a square called Praca da Figueira.

In the morning, we ride the trolley to the Castelo de Sao Jore, whose grounds feature the work of Jean-Michel Folon, a sculptor. His statues have question marks, forks, cat faces, and suitcases for heads.

Other tourist highlights include the Triumphal Arch, Elevator to Santa Justa, Botanical Gardens, and Museu do Chiado.

I buy a USA Today and learn 223 people are being questioned about the terrorist attacks, with 23 arrested. The tears come when I read in Newsweek that empty hospital beds awaiting patients outside Saint Vincents’ emergency room were empty because there were no patients to bring.

After two days in Lisbon, we head for Sintra near the coast to see the “crazy” castle, as Lisa calls it, with many styles and colors, pink and yellow. It’s raining and foggy. Mona spots cape ivy as we ride the trolley back from the castle.

We leave for Madrid at 5:30 p.m. and arrive after midnight.

The next day, I watch TV. A fundraiser is held for the victims of the terrorist bombings, featuring Bruce Springsteen and other stars. The U.S. ends diplomatic relations with Afghanistan. People are streaming out of Afghanistan.

It’s time to go back to the U.S. and, fortunately, our plane is leaving as scheduled. When I go through customs in Philadelphia, all my bags are searched.

Although I enjoyed my vacation with my daughters, I’m glad to be home so I can get more news about what’s happening.

Ironically, I’d arranged to have my house painted red, white, and blue while I was gone. As I look at it, I think about all the flags I’ve seen flying, how the country is trying to rally after the disaster, and what will happen next.