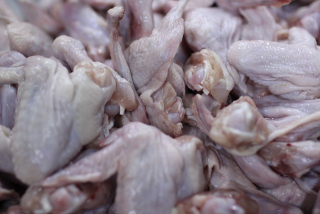 A new “key performance indicator” aimed at reducing Salmonella infections in poultry is being introduced by the U.S. Department of Agriculture.

The rising numbers of foodborne illness from poultry prompted the new policy.

Since 2012, Food Safety and Inspection Service inspectors have found fewer poultry samples that test positive for Salmonella. However, more people are getting salmonellosis from chicken and turkey.

That’s because not all Salmonella are equally dangerous, said Thomas Gremillion, director of food policy for the Consumer Federation of America.

There are more than 2,500 types of Salmonella, and many of them rarely cause illness. FSIS performance standards for poultry processors, however, are based on the number of samples that test positive for any type of Salmonella species.

“The current performance standards fail to give poultry processors an incentive to distinguish between dangerous Salmonella and relatively innocuous serotypes,” Gremillion said.

That encourages processors to rely on actions late in the process, such as antimicrobial sprays, rather than precautions earlier, such as vaccines for live birds, he said

The proposed indicator would move U.S. poultry regulation closer those used in the European Union since 2003.

In the EU, regulators have targets for reducing a handful of Salmonella types most associated with human illness in live chickens and turkeys. That policy has significantly reduced salmonellosis cases in EU countries.

Gremillion said the proposed FSIS policy doesn’t go as far as the EU’s.

It introduces a metric the agency can use to measure progress in reducing types of Salmonella contamination. It will use data from the Centers for Disease Control & Prevention and its own testing program to define which types to target.

The agency will seek to reduce the number of samples testing positive for those types each year. However, it didn’t say how it plans to accomplish those reductions.

“The proposed key performance indicator could give federal regulators a meaningful goal by which to measure progress towards reducing foodborne illness through meat and poultry inspection,” said Gremillion.