Home About Newsletter Categories Donate
Hobby Lobby recalls white wood stools because they may collapse
Halloween Safety Part 1: Halloween myths and what you should worry about instead 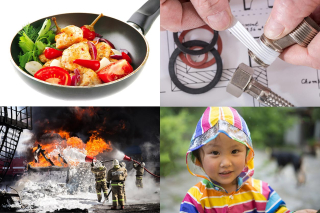 PFAS, per- and polyfluoroalkyl substances, are widely used in industry and consumer products. They’re highly persistent in the environment. PFAS is linked to effects on the immune system, hormone levels, neurodevelopment, pregnancy outcomes, cancer, and other health concerns,

EPA’s Roadmap is centered on three strategies: increase investments in research, leverage authorities to take action now to restrict PFAS chemicals from being released into the environment, and accelerate the cleanup of PFAS contamination.

“For far too long, families across America – especially those in underserved communities – have suffered from PFAS in their water, their air, or in the land their children play on,” said EPA Administrator Michael S. Regan.

The national PFAS strategy will deliver protections to people who are hurting, by advancing bold and concrete actions that address the full lifecycle of these chemicals, Regan said.

EWG also criticized the Defense Department as well as FDA and FAA leaders for failing to take meaningful action to address PFAS.

Thousands of communities have detected these toxic forever chemicals in their water, and PFAS has been confirmed at nearly 400 military installations, said Scott Faber, EWG’s senior vice president for government affairs. EWG estimates that more than 200 million Americans are drinking water contaminated with PFAS.

“No one should have to worry about toxic forever chemicals in their tap water,” said Farber said.

After more than two decades of delay, it’s good news that EPA is finally starting to act, he said, adding faster action is needed to turn off the tap of PFAS pollution by industry.

“Communities living downwind and downstream of these polluters have waited decades for action,” Farber said.

The DOD has been slow to address PFAS contamination or warn service members of the risks, according to an EWG review of DOD records.

“When will DOD officials make PFAS cleanup a priority?” Faber asked. “Will designating PFOA and PFOS as hazardous substances finally make hundreds of toxic plumes flowing into our defense communities a priority for DOD? Or will DOD continue to ignore its own policies when it comes to these toxic forever chemicals, as DOD’s own inspector general recently concluded?”

EWG also urged officials at the FAA to allow commercial airports to use PFAS-free firefighting foams.

“FAA is ignoring the clear intent of Congress,” said Melanie Benesh, EWG legislative attorney. “Airports across the globe are using PFAS-free alternatives, and the FAA should allow American airports to immediately use these safer foams as well.”

In addition, EWG urged officials at the FDA to ban PFAS from food packaging – and to stop misleading consumers about PFAS in food.

“The contrast between EPA’s plan to address PFAS and FDA’s failure to act could not be starker,” Benesh said.