Best wishes for the new year, but who knows what it will bring 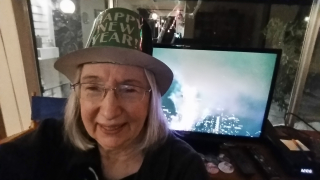 It’s shocking to be sitting here at my computer and seeing that covid cases are up more than 200 percent from two weeks ago. Right now, we have more covid cases than at any time during the pandemic.

With about 62 percent of Americans vaccinated, I was surprised that another variant could come along and cause so much havoc.

I’ve seen lots of photos of people at large holiday gatherings and on vacations.

The Nashville New Year’s Eve celebration on television showed a large, unmasked crowd. Event organizers said they were requiring a negative test taken 48 hours prior to the event, a “monitor test” if a person could bring that. A vaccination card could be shown in lieu of a test. And masks were encouraged for the general public.

During 2021, I tried my best to keep positive and continued writing blog articles and working on my book “Follow the Money: My Life as a Financial Journalist.” Fortunately, I work from home and don’t need to go into an office.

However, for many people, keeping going during the pandemic has been a challenge.

I do hope that 2022 will be better than 2021 for everyone in the United States and throughout the world. A lot of people have been saying that on social media, and I do hope it happens.