Home About Newsletter Categories Donate
Have you ever wondered about the safety of eating a home delivered meal?
7 tips on how to teach kids about money

Super Bowl ads continue to be unimaginative in 2022, with violence again being used to sell 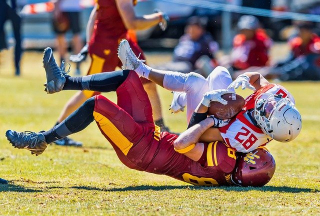 The Super Bowl ads for 2022 were mostly disappointing. Although a few had a good message, the overall feel of the game show was dystopian. A QR code drifting across the screen, ads for apps and betting websites I’d never heard of, and supposedly clever ads featuring stars from TV series I’ve never seen.

As usual, violent movie ads dominated the Super Bowl, along with the violence of the game. And, there was the return of violence to sell an idea with a football player tackling four people, including Pete Davidson, who were throwing away food that could have been used another way.

I haven’t seen much of that since Betty White was tackled in a 2010 Snicker’s ad or a man was slapped in the face because his sandwich was good. Unfortunately, ad makers, and the companies that hire them, think using violence to sell is a good idea.

NBC made an all-time high of more than $6.5 million for 30 seconds of advertising time. More than 100 million viewers watched Super Bowl 2022.

Salesforce ad with Matthew McConaughey urging people to concentrate on restoring the earth rather than looking to the metaverse and Mars, a reference to Mark Zuckerberg and Elon Musk.

Greenlight ad about its debit card and money app for families, managed by parents.

Toyota ad about two brothers and how one lost his eyesight and his brother helped him win gold medals at the Paralympics.

Expedia ad on saving more for the things that matter instead of just buying stuff.

BMW ad featuring Arnold Schwarzenegger as a retired Zeus and Salma Hayek as his wife Hera. Zeus gets tired of people asking him to charge their portable hedge clippers, golf carts, and other items with bolts of lightning. She cheers him up by buying a BMW electric.

Alexa ad in which Alexa reads the minds of Scarlett Johansson and Colin Jost.

Sam’s Club ad where Kevin Hart says the new Scan & Go app was developed just for a VIP like him. Scan & Go is an app that adds up your groceries as you shop and you pay with the app so you don’t need to stand in line.

Nissan ad for the Nissan Z sportscar in which Eugene Levy transforms into an action star with long gray hair and drives off a roof.

TurboTax Live ad with a customer changing into different people.

Toyota ad where Leslie Jones and three other Jones race through the snow, pause in a row, then a Jonas drives up.

Irish Spring ad in which a stranger comes to a land and the residents whisk him off to have a bath with the soap because he doesn’t smell good.

WeatherTech ad in which men in black jump out of a helicopter to install the mats in a car.

NFL ad on “progress” in the football, including how player injuries are being addressed.

Uber Eats ad featuring Jennifer Coolidge, Trevor Noah, Gwyneth Paltrow, and Nick Braun from “Succession” as they try to eat non-edible products such as diapers and lightbulbs to show the company now delivers nonfood, too.

NFL ad where two small-sized football teams come out of the TV and crash up the home of two kids who were playing a video game.

Coinbase ad with a QR code floating across the screen.

Hellman’s Mayo ad featuring a football player tackling five people, one of them a grandmother, to get them not to waste food.

Rakuten ad set in a casino where two women players up the bet with high heels and a robo vacuum, and the woman with the Rakuten cash back app wins.

Avocados from Mexico ad where avocados change an approaching Roman game into a lovefest.

Doritos/Cheetos ad featuring sloths and other animals singing to Salt-N-Pepa’s “Push It” as they consume Flamin’ Hot Doritos and Cheetos snacks from bags dropped by a wildlife observer.

Verizon ad featuring Jim Carey as the cable guy who is dumbfounded by the quality and ease of Verizon’s 5G Ultra Wideband internet.

FTX ad featuring Larry David, as a man who said many modern advancements were wrong, then says “I don’t think so,” about crypto currency.

Lay ad with Seth Rogen and Paul Rudd showing them just before their wedding sharing memories about good times eating potato chips, including finding a violent ghost in the house they purchased. She attends the wedding.

Bud Light Seltzer Hard Soda ad with Guy Fieri as the mayor of the Land of Loud Flavors.

Bud Light Zero Next with people who say they gotta move, leave this place, and change their life in some new town.

Planters’ ad about an argument between Ken Jeong and Joel McHale, former co-stars on the NBC sitcom “Community,” about the best way to eat mixed nuts – one at a time or a handful. They ask social media and worldwide rioting occurs. It ends with the comment “Who knew America would tear itself apart over a relatively minor difference of opinion?”

Booking.com ad featuring Idris Elba made jokes about not being “lit.”

I don’t enjoy or know much about rapping. I thought the set, made up of small buildings which were to represent the city of Los Angeles, made it difficult to see the performers. Then, it looked like the network was trying to cut away from performers grabbing their crotches.