Credit bureaus to remove most medical debt from credit reports 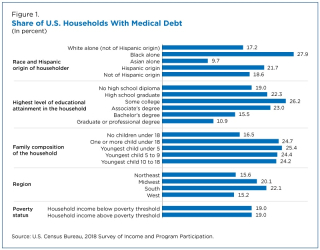 Equifax, Experian, and TransUnion, the three major credit bureaus, are changing how they’ll treat the reporting of medical debt. The new actions will result in nearly 70 percent of medical debt in collections being removed from credit reports.

Paid medical debt will be erased from consumer reports and any new medical debt won’t be included in credit reports until a year, rather than the current six months, after the debt is given over to collection agencies.

Beginning in 2023, owed medical debt of less than $500 won’t be included in credit reports.

The Consumer Financial Protection Bureau recently issued a report that described the widespread problem of medical debt for American families.

About 20 percent of American households say they have medical debt, according to the report. As of the second quarter of 2021, 58 percent of bills in collections and on credit reports were medical bills.

These debts can remain on credit reports for seven years, making it less likely for affected individuals to get loans, buy a home, or in some cases, to get a job.

“We have known for years that medical debt doesn’t predict credit defaults, nor does it accurately predict a person’s desire and willingness to pay off loans,” said Patricia Kelmar, health care campaigns director for U.S. PIRG, a public interest organization. “After feeling the heat from the CFPB and its new director, Rohit Chopra, the credit bureaus appear to have finally seen the light and are course-correcting.”

Delaying medical debt reporting by a year, wiping paid medical debt from credit reports, and ending the inclusion of medical debt under $500 are all welcome relief that can’t come soon enough, Kelmar said.

“We need a fair credit system that doesn’t penalize people for life events they can’t control like getting sick,” Kelmar said.