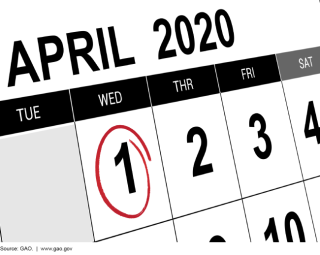 On the day when everyone makes jokes, remember not to make tasteless or inappropriate jokes about people, especially about how people look or their illnesses.

Last night on “The Late Show,” Stephen Colbert had a sketch about women with “lesser-celebrated” accomplishments for Women’s History Month. Like me, he waited until the last day of March to recognize the month.

Actress Jane Krakowski did the sketch about fictitious women – one, for example, the first woman to take off her bra through her sleeve.

I didn’t think the sketch was funny.

Women have been discriminated against for so long. For example, it took nearly 80 years of protests for women in the United States to be able to vote. In addition, women are often excluded in accounts of history.

On April Fools’ Day, I did get to make a couple of jokes.

My First Friday Lunch group met by Zoom. I told people we could meet outside in my yard for May. And, since the date would be two days after my birthday, they could bring me a present. Then, I got to say, “April fool.”

In addition, I’m fortunate that the woman who helped me do yard work before the pandemic is now back in town. She was able to help me today. I asked how much she was charging after we’d done several hours of work, knowing that with inflation she’d probably be charging more. When she gave me the number, I said, “That’s too much.” Fun, I got to say “April fool,” again.

Here are some other ideas on what to avoid today on this famous joke day:

Have fun. I hope your April Fools’ Day is fun and full of laughs.