Home About Newsletter Categories Donate
School chairs are being recalled by Amazon due to fall risk
Dirty Dozen and Clean Fifteen 2022: Produce with the most and least pesticides 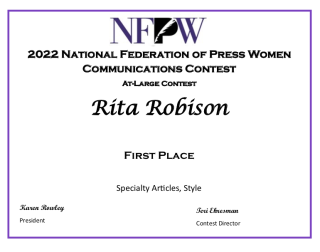 For many years, when I lived in Alaska and Washington state, I participated in the state contests of the National Federation of Press Women or NFPW. However, when the Washington chapter of the organization faded away in 2015, I missed participating in the organization and its annual contests.

I discovered in 2020 that I could take part in another state’s contest or I could enter the NFPW’s At-Large Contest.

For articles written in 2021, I won 11 awards in the At-Large Contest:

“Thank you for entering the NFPW at-large communications contest,” Teri Ehresman, NFPW contest director said in an email. “Your entries all did great in the at-large contest this year!”

Karen Rowley, NFPW President, thanked the national and state contest directors and all of the judges for their work for the NFPW’s 2022 communications contest in the organization’s April 2022 newsletter.

“It is hard, hard work to organize and run the contests, whether at the state, national or high school level,” Rowley said. “Thanks also to all of you who entered. It’s always amazing and wonderful to see the incredible talent of our members.”

Through the years, I’ve won 79 awards for my articles and columns, most from the NFPW.

More good news on awards for my work in 2021. I won a first place for my article "Top Consumer and Personal Finance Stories of 2021" in the Western Washington Contest for the Society of Professional Journalists. It's the first SPJ award for an article on my blog, although I won five SPJ awards when I worked for newspapers. I think I even get a trophy. So with my 11 awards in the state At-Large Contest for the National Federation of Press Women, 2021 was a good year.