The baby formula shortage: a monopoly market, the FDA recall, and efforts to fix the shortage 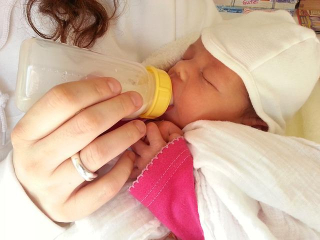 The news that baby formula is in short supply is really confusing, especially when conspiracy theories are now running rampant.

The baby formula market is a shared monopoly, with only a few manufacturers controlling nearly all supply, according to an article in Fortune. Abbott has about a 40 percent of the market share. It has exclusive contracts in many states with WIC, the USDA’s supplemental nutrition program for low-income families, which makes up nearly half of formula sales nationwide. A few other manufacturers, including Mead-Johnson and Nestlé, also have WIC contracts and control the rest of the market.

New York Sen. Kirsten Gillibrand, in an NPR article, said sellers are preying on vulnerable families and are price gouging. Gillibrand blamed the shortage on “corporate greed and malfeasance” pointing to Abbott Nutrition, which recalled many of its formula products in February due to safety concerns.

The Abbott recall and shortages

See the information below from the May 14, 2022, issue of Food Safety News, a daily newsletter covering food safety policies and foodborne illness outbreaks:

The CDC has declared that an outbreak of cronobacter infections among babies is over, but the Food and Drug Administration is continuing its investigation into the maker of the implicated infant formula.

The FDA received four complaints of cronobacter infections in infants beginning on Sept. 20, 2021, and running through Jan. 11, 2022. Two of the infected babies died. Parents of all four infants reported having fed their children formula produced by Abbott Nutrition before they became ill.

The Centers for Disease Control and Prevention worked with the FDA and state health departments to investigate the outbreak. The FDA began an investigation into Abbott’s Sturgis, Michigan, production facility and the plant remains closed while the investigation continues. Although five strains of cronobacter have been found in the production plant, none of them is an exact match for the patient samples.

The situation led to the recall of certain Similac products as well as products sold under the Alimentum and EleCare brands.

The FDA is continuing to advise consumers not to use recalled Similac, Alimentum, or EleCare powdered infant formulas. Recalled products can be identified by the 7- to 9-digit code and expiration date on the bottom of the containers. Products are included in the recall if they have all three items below:

In addition to the products described above, Abbott Nutrition has recalled Similac PM 60/40 with a lot of code 27032K80 (can) / 27032K800 (case). At this time, Similac PM 60/40 with lot code 27032K80 (can) / 27032K800 (case) is the only type and lot of this specialty formula being recalled. Additional recall information for the initial recall is available on the FDA website. The recalls don’t include liquid formula products.

Because of the recalls, a shortage of powdered infant formula is being reported by parents and caregivers across the country. A subcommittee in the U.S. House of Representatives is scheduled to begin a hearing on the situation on May 25.

In the meantime, President Biden, FDA officials, and administrators from the U.S. Department of Agriculture are all on record as saying they’re working to resolve the shortages.

The FDA has played down the shortage, reporting earlier this week that more infant formula was sold in April than was sold in March. The agency established an Incident Management Group on April 1 to work on supply chain and food safety issues.

On Friday the USDA, which oversees the federal WIC program that provides food assistance to women and their infants and children, reported that it’s working with states on the flexibility of requirements for recipients.

“We’re acutely aware that the ongoing recall has left many parents and caregivers concerned about access to formula and how they will feed their babies,” said Agriculture Secretary Tom Vilsack. “Our team is committed to the health and safety of all Americans and is calling on states to act immediately to offer maximum flexibility, information, and support to WIC participants. Meanwhile, USDA will continue the work we started in February, working not only within our department but across the federal government, suppliers, and partners to end this infant formula crisis as quickly as possible.”

Days after the Abbott recall was announced on Feb. 17, the USDA started working with state WIC partners to ensure that enough infant formula was available to program users.

“USDA’s Food and Nutrition Service (FNS) immediately reached out to states to offer support and within days, announced a suite of flexibilities available, such as allowing states to broadly offer alternate sizes, forms, and brands of formula and allowing stores to accept exchanges of formula purchased with WIC benefits,” according to USDA’s statement issued Friday.

USDA is also in communication with Abbott, with Secretary Vilsack today calling on the company to redouble its efforts to ensure WIC participants have access to safe formulas, especially those who rely on specialty formulas produced by Abbott.

Earlier this week, the FDA announced that it has allowed Abbott to begin releasing certain products on a case-by-case basis for infants with special medical problems.

Typically, there are rules about what products families can purchase with WIC benefits and what stores can allow. USDA has been working with states to relax those rules to help deal with the impacts of the shortage.

“To date, not all states have adopted all flexibilities. With today’s letter and ongoing technical assistance efforts, President Biden and USDA are strongly urging all states to immediately take advantage of those flexibilities to alleviate burdens across the supply chain and stand ready to assist with their requests,” the USDA stated Friday.

The USDA also asked WIC agencies to encourage families to exchange their recalled formula, issued reminders about options for returns and exchanges of recalled products, and posted several resources on infant formula safety including guidance for parents and caregivers.

The FDA could have responded much sooner to address the issue of contamination at the Abbott plant, a review of the events and federal regulations by Consumer Reports found. Read the details in “How the FDA Bungled the Powdered Infant Formula Recall.”