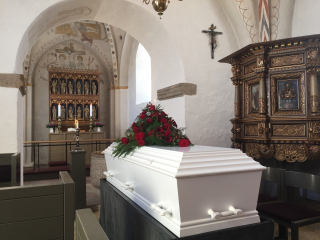 Only a small number of funeral homes allow consumers to look at their price lists on their websites so they can compare prices. Just 191 of 1,046 funeral homes or 18 percent in a survey posted their prices online, according to a report issued Tuesday by the Funeral Consumers Alliance and Consumer Federation of America.

“Most consumers, especially those out-of-town or having to deal with a sudden death, cannot practically visit several funeral homes to pick up price lists,” said Joshua Slocum, the Funeral Consumers Alliance or FCA’s executive director and the report’s co-author.

The survey also found that only 20 percent of 1,146 respondents who had helped plan a funeral said they had visited more than one funeral home to obtain price lists.

The Federal Trade Commission or FTC needs to update its Funeral Rule to require online posting of the price lists for funeral homes, the consumer groups said in a statement.

In another survey of 2,009 Americans, 75 percent favor and 3 percent oppose mandatory price posting for funeral homes with websites.

The FTC’s Funeral Rule, approved in 1984, requires funeral homes to have a detailed price list and hand it to consumers visiting and discussing services with the funeral home.

The report says that this price disclosure has reduced deception and fraud but hasn’t facilitated comparison shopping of the expensive funeral services purchased by consumers.

“Online price posting would benefit not just those consumers searching for price information, but also all consumers by encouraging price competition and discouraging funeral homes from charging exorbitant prices,” said Stephen Brobeck, a Consumer Federation of America or CFA senior fellow and the report’s co-author.

There were wide differences in the percentages of those posting prices among the capital 35 cities:

In Sacramento, because California requires online posting, 70 percent of 45 funeral homes posted prices. Thirty percent chose to use a loophole in the law to avoid posting.

Past research by the FCA and CFA suggests that Dignity Memorial homes tend to charge higher prices than other funeral homes, which may be why they refuse to post prices online, according to the report.

In 2020, the FTC announced that it was considering updating the Funeral Rule to improve price competition. The agency is still considering whether to begin rule-making.

Despite the lack of online price lists, the FCA and CFA urge consumers to visit several consumer homes to obtain prices lists before choosing one. Earlier surveys by the two consumer organizations and other research found differences in funeral prices of up to 400 to 500 percent for the same services.

“Online price posting reveals whether a funeral home wishes to facilitate consumers knowing the price of their funeral services and allowing a comparison of those prices with the services of other funeral providers,” said Slocum.