Home About Newsletter Categories Donate
Watch out for loans at auto repair chains made through EasyPay Finance and TAB Bank, consumer groups warn
Bank of America to pay $10 million for illegal, out-of-state garnishments 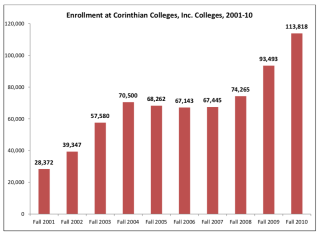 The U.S. Department of Education announced Wednesday it will discharge all remaining federal student loans borrowed to attend any campus owned or operated by Corinthian Colleges Inc. from its founding in 1995 through its closure in April 2015.

As a result, 560,000 borrowers will receive $5.8 billion in loan discharges. This includes borrowers who haven’t applied for a discharge.

In 2015, the department found that Corinthian engaged in misrepresentations about a borrower's employment prospects, including guarantees they’d find a job. Corinthian also made misstatements to prospective students about the ability to transfer credits and falsified their public job placement rates.

Founded in 1995, Corinthian acquired several troubled private for-profit colleges across the country. At its peak in 2010, it enrolled more than 110,000 students at 105 campuses.

“For far too long, Corinthian engaged in the wholesale financial exploitation of students, misleading them into taking on more and more debt to pay for promises they would never keep,” said Cardona.

Investigations and lawsuits by state agencies, the department, and other federal and state regulators resulted in Corinthian selling most of its campuses in 2014 and closing the remaining ones in 2015.

Including this group discharge for former Corinthian students, the department has now approved $25 billion in loan forgiveness for 1.3 million borrowers.

The department is also working on new regulations that will improve existing student loan relief programs, reduce monthly payments, and provide greater protections for students and taxpayers against unaffordable debts, he said.