Watch out for loans at auto repair chains made through EasyPay Finance and TAB Bank, consumer groups warn 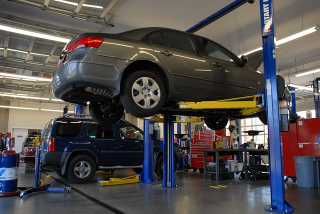 Major national auto repair chains need to stop offering financing through EasyPay Finance and Utah-based TAB Bank, which issue loans at rates up to 189 percent even in states where that rate is illegal, consumer groups recommend.

“Consumers struggling to pay for auto repairs repeatedly report being steered into predatory loans with shocking and often deceptive rates hidden in the fine print of applications, frequently not known until after the repairs are completed,” the letters state. “These predatory loans have a lasting impact on consumers, causing harm to their credit reports and leading to debt collection harassment.”

The letter urged each repair chain “to disassociate itself from these practices that exploit vulnerable families.”

The letters follow a consumer alert and report from the National Consumer Law Center describing hundreds of complaints from consumers about the high rates and deceptive and abusive practices, with many consumers misled and under the impression they were agreeing to interest-free payment plans.

The letters were sent from the following consumer groups: Accountable.US, Americans for Financial Reform, the Center for Responsible Lending, CLEAR, the Consumer Federation of America, and the National Consumer Law Center.

Through auto repair and tire shops across the country, EasyPay Finance, owned by Duvera Billing Services, issues loans up to 189 percent APR. EasyPay advertises to auto repair shops that it can “Increase Your Shop’s Revenue” and prevent “Losing Your Credit Challenged Customers.”

This is a scheme for EasyPay to collect exorbitant rates it can’t legally charge directly, the consumer groups said in a statement. In other states, EasyPay lends directly in its own name, often as a retail installment sale.

“EasyPay loans are souring consumers on your companies and discourage their repeat business,” the consumer groups said in their letters to the corporations.

Thankfully, I am not the target market for this stuff.

This is so sad to hear about. Loan companies exploit people who are vulnerable and this leads to catastrophes like 2008.

As a consumer, we always need to be on the lookout for price gouging like this. It's rampant during the pandemic.

This is a shame. And these loans are targeting marginalized societies that make less money and have a harder time paying back bills in the first place. And if they get hauled into court for failure to pay in states like Louisiana they may end up in debtor's prison if they can't afford their legal fees. Just another concept to keep poor people down while making outrageous money off their backs.