Home About Newsletter Categories Donate
More than 600,000 ceramic tower heaters are being recalled due to fire and burn risks
Facts and figures for July 4th 2022 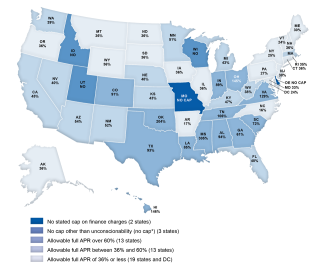 In states that allow high-cost loans, excessive interest rates can trap borrowers in a cycle of debt.

Caps on interest rates and loan fees are the main way states can protect consumers from predatory lending.

Forty-five states and the District of Columbia currently cap interest rates and loan fees for at least some consumer installment loans, depending on the size of the loan. However, the caps vary greatly from state to state, and a few states don’t cap interest rates at all.

The National Consumer Law Center, a group that works on issues for low-income consumers, recommends capping annual percentage rates APRs, including fees, at 36 percent for smaller loans, such as those of $1,000 or less, with lower rates for larger loans.

In its annual review, the center found progress toward a 36 percent APR cap for common short-term and longer-term loans in some states.

Two states – New Mexico and North Dakota – enacted new laws that dramatically reduce the annual percentage rate or APRs and fees allowed for a $500 six-month and $2,000 two-year installment loan, according to a new report from the center. However, several states went in the opposite direction, allowing predatory loans to carry even higher APRs.

“We applaud the actions that states like New Mexico and North Dakota took to protect residents from high-cost debt-trap installment loans,” said Carolyn Carter, deputy director of the National Consumer Law Center and author of the report. “And we thank Louisiana Governor John Bel Edwards for his decision to veto a bill that would have allowed an APR of almost 300% on a $500 6-month loan.”

In 2021, the state legislature in North Dakota imposed a 36 percent APR cap on all non-bank installment loans; previously there had been no cap at all for loans over $1,000. High-cost, short-term payday loans continue to be available in North Dakota.

The New Mexico legislature reduced its APR cap from a predatory 175 percent to 36 percent for a $2,000, two-year loan and 52 percent for a $500, six-month loan. Also, Maine tightened its anti-evasion provision, which means a lender can’t take any action with the intent of evading the requirements of a law.

The center’s recommendations for states to protect residents from predatory high-cost lending in addition to capping APRs include: