Home About Newsletter Categories Donate
Off-highway vehicles: Use caution as deaths, injuries increase during summer months
New deadline to get a refund if you paid a scammer through Western Union 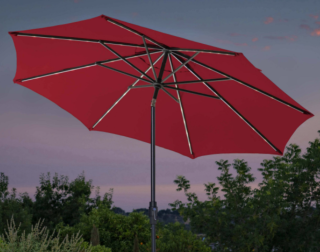 SunVilla Corp. is recalling about 400,000 10-foot Solar LED Market umbrellas in the United States and about 33,000 in Canada.

The lithium-ion batteries in the umbrella’s solar panels can overheat, posing fire and burn hazards.

This recall involves all 10-foot Solar LED Market umbrellas sold in a variety of colors. The umbrellas have LED lights on the arms of the umbrella and a black solar panel battery puck at the top of the umbrella.  The solar puck has a black cover marked with “YEEZE” or “YEEZE 1.”

The umbrellas were sold only at Costco warehouses nationwide and online at www.costco.com from December 2020 through May 2022. The cost was between $130 and $160.

Consumers should immediately stop using the umbrellas, remove the solar panel puck containing a lithium-ion battery from the top of the umbrella, and store the puck out of the sun and away from combustible material. In addition, consumers are advised not to charge the puck with the AC adapter.

Consumers can return the umbrellas and solar puck to any Costco Warehouse nationwide for a refund, the company and U.S. Consumer Product Safety Commission advise. Consumers unable to return the product to Costco can contact the firm for instructions on how to receive a refund. SunVilla and Costco are contacting all known purchasers.