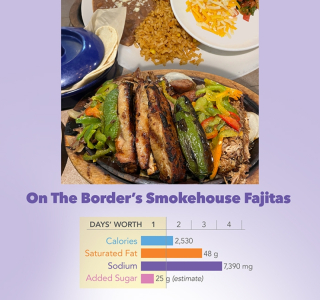 I haven’t been eating out during the pandemic. However, since my daughter and her family are visiting from Spain, I said I would go out to eat if we could eat outside.

What struck me during the few meals we’ve had at restaurants is that they continue to serve such large portions. You’d think with inflation and supply chain issues, that restaurants would finally begin serving a reasonable amount of food rather than piling it on.

The Xtreme Eating Awards given by the Center for Science in the Public Interest are back after a two-year break for the pandemic.

Few people would eat 13 Taco Bell Beef Soft Tacos in one sitting. However, that’s about what On The Border serves up its Smokehouse Fajitas. The chain calls them “Texas-size,” but the center says “Slaughterhouse Fajitas” might be a better name for this platter of ribs, sausage, pork carnitas, and beef brisket, plus six flour tortillas, refried beans, rice, cheese, and pico de gallo.

The Smokehouse Fajitas – one of eight “winners” of the 2022 Xtreme Eating Awards – has more than a day’s worth of calories, 2,530.

Among the other “winners” are:

Bob Evans’ The Whole Hog: The breakfast combo comes with two strips of bacon, two sausage patties, two sausage links, a slice of ham, two eggs, a hotcake, and a slice of French toast, plus hash browns, home fries, or fresh fruit. With the home fries and fried eggs, Bob’s Whole Hog hits a day’s worth of calories, 2,000, plus nearly two days’ worth of saturated fat, 35 grams, and sodium, 4,750 milligrams. It’s like eating two Sausage McMuffins, two Egg McMuffins, and six hotcakes in one sitting at McDonald’s.

Applebee’s Shark Bowl: One of several Applebee’s “Mucho” cocktails served in giant goblets, this one is garnished with a pair of gummy sharks. With 630 calories and an estimated two days’ worth of added sugar, this cocktail is like drinking a liter of Sprite plus two ounces of rum.

The Cheesecake Factory’s Classic Italian Trio: Fettuccini Alfredo is served with Chicken Parmesan and Baked Rigatoni, for a grand total of nearly a day and a half’s worth of calories and almost a work-week’s worth of saturated fat. The center says it’s like eating three Pizza Hut Supreme Personal Pan Pizzas plus one stick of butter.

“Restaurant chains may have learned how to keep their customers and employees safe during the covid-19 pandemic,” said Lindsay Moyer, a senior nutritionist for the center. “But nutritionally, the chains are carrying on as if nothing has happened, despite the fact that typical American diets boost the risk of type 2 diabetes, heart disease, stroke, and obesity, all of which are linked to worse outcomes for covid.”

The center began giving out the Xtreme Eating Awards in 2007 to help make the case for one of the group’s policy goals: getting calorie counts on chain restaurant menus and menu boards. That mission was mostly accomplished in 2010, with the passage of the Affordable Care Act, and with the Food and Drug Administration’s effort to develop regulations.

Now, nearly all major chains comply in their restaurants and on their websites. But calories can be absent when ordering on third-party platforms such as DoorDash or Uber Eats, where menus compliance with the law is inconsistent.

The center and other health groups want restaurants to disclose added sugars on request, as they do for saturated fat, sodium, and more. The center is working with communities in several states to require warning icons on menus when items contain excessive amounts of added sugar, sodium, or other unhealthy nutrients.

I haven't eaten at any of those restaurants but in general, if the portions served at a restaurant are too large for me to eat at one sitting, I asked for a box to take home what I can't eat--I think sometimes it takes awhile to develop a habit of remembering you don't have to finish everything on your plate and/or to stop for awhile (I've read it takes 20 minutes for someone to realize/feel they're full) and realize you're ready to stop eating.

Sometimes I get another two meals from what I bring home. I may freeze a portion to eat another time if the dinner was high calorie. Mostly I stick to the 4-5 good to ok restaurants in the two towns I spend most of my time in (each has 4 or 5) that stayed open/did take out/set up outside seating--so I eat at those on the rare occasions I eat out and/or if friends visit.
When I return to NY (where I grew up), one of my friends is an excellent cook, as is her husband (who ran/owned several Asian restaurants during his career), plus, in the city, I can choose from a wide variety of cuisines-- a great opportunity to explore new cuisines or melds of cuisines and at least a few managed to have outside seating.

Absolutely fascinating, Rita! And shocking!
It’s no wonder we struggle with weight and health issues!
I do like the larger portions...I put half of it in a carton to take home and have lunch for the following day! ;)

I hardly ever eat at the chains, but if I do, take home half the meal. I can't imagine eating that huge amount of food (with apps and dessert sometimes, as I've seen). No wonder our country is having an obese epidemic.

I've been to some restaurants like Claim Jumper where meals are served on plates as big as a trough. No wonder we have an obesity problem. It's such a difference from eating in Italy where you get small portions of everything on much smaller plates. Also, giant meatballs, Fettucine Alfredo, and a few other popular "Italian" dishes aren't even Italian. They are American interpretations of Italian food.

Yes, it's astonishing how eveyrthing here is supersized...quantity over quality. Oh and I read that The Cheesecake Factory's food isn't all that healthy, even the light menu. Although it's yummy.

Wow. Can't even think about eating all that food. I sometimes like to order an appetizer and soup as my meal.