Home About Newsletter Categories Donate
Watch out for scammers offering free covid tests to people on Medicare
Two PFAS, ‘forever chemicals,’ to be designated as hazardous by EPA 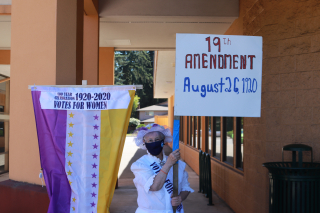 In 1973, Congress designated Aug. 26 as Women’s Equality Day. The date was selected to commemorate the 1920 certification of the 19th Amendment to the Constitution, guaranteeing women the right to vote.

It was the end of a huge, civil rights movement by women that had its beginnings in 1848 at the world’s first women’s rights convention in Seneca Falls, New York.

This year, it’s discouraging because the Republican Party and the far right are so active, and are having successes in some areas, in taking away the rights of women. It’s incredible to me that they believe in and argue for so many things that are harmful to American families: student loan forgiveness, environmental rules that reduce air and water pollution, voting rights, child tax credits, mask mandates, the SNAP program, Medicaid, Medicare, and more. And it’s doubly unbelievable that some Americans believe that these anti-family policies should be public policies.

I guess I’ll just need to try to be positive that there are still elected officials who are working for equal rights for women. President Joe Biden said in his proclamation on Women’s Equality Day:

Today, the struggle to ensure that every American can cast their ballot continues. More Americans voted in 2020 than during any election in our history, but some States are restricting this fundamental right through provisions that overwhelmingly impact people of color, low-income communities, and people with disabilities. Women are less likely to have time to vote in-person with increased caregiving demands and a disproportionate share of low-wage, inflexible work. The right to vote and to have that vote counted is essential to the future of our democracy.

We are also committed to ensuring women are treated fairly in the workplace and have economic security. We will fight for pay equity, to end discrimination in the workplace, and to promote equitable access to good-paying jobs, particularly in sectors where women are underrepresented. We remain dedicated to lowering the costs of child care and passing policies to help women navigate caregiving and work responsibilities.

We will also continue to support the Equal Rights Amendment, so that we may enshrine the principle of gender equality in our Constitution.

Progress has been made in equality for women. I remember applying for a reporting job with a Spokane newspaper in the 1980s and being told that the “woman’s slot” was filled.

But so much more needs to be done. And the Right needs to be stopped on its assault on women.