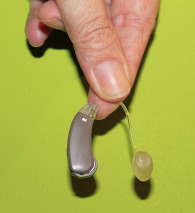 Access to hearing aids is being improved, which may lower costs for millions of Americans.

The U.S. Food and Drug Administration issued a rule Tuesday that establishes a new category of over-the-counter hearing aids, enabling consumers with mild to moderate hearing impairment to purchase hearing aids from stores or online retailers without a medical exam, prescription, or a fitting adjustment by an audiologist.

The action follows an executive order from President Biden, which called for the FDA to take steps to allow hearing aids to be sold over the counter and set a 120-day deadline for action, which the FDA met.

In 2017, Congress passed legislation requiring the FDA to create a category of OTC hearing aids, but it wasn’t carried out until now.

Consumers could see OTC hearing aids available in retail and drug stores as soon as mid-October when the rule takes effect.

About 30 million adults in the United States could benefit from hearing aid use. Individuals with permanent hearing impairment can use hearing aids to help make speech and sounds louder, improving the ability to communicate with others.

Many hearing aids can be expensive. Some estimate the new, OTC aids will cost between $200 and $800.

“Hearing loss is a critical public health issue that affects the ability of millions of Americans to effectively communicate in their daily social interactions,” said FDA Commissioner Robert M. Califf, M.D. “Establishing this new regulatory category will allow people with perceived mild to moderate hearing loss to have convenient access to an array of safe, effective and affordable hearing aids from their neighborhood store or online.”

The FDA finalized the rule after receiving and reviewing more than 1,000 public comments on the proposed rule issued on Oct. 20, 2021.

Do research when buying an OTC hearing aid because there’s a lot to consider, including battery life, fit, sound clarity, and more.

A recent article by Consumer Reports reported on a survey of members in which 16 hearing aid companies were rated. Costco came out on top.

Also be aware that some companies may use high-pressure sales. Check out any company you’re considering dealing with on the Better Business Bureau website.

Depending on the amount of hearing loss and before spending 200 to 800 on a hearing aid, I suggest that someone try one of the cheaper versions on Amazon. We spent less than 30.00 on something called a New Ear, which made such a huge difference with my mother. She wasn't totally deaf, but it sure beat screaming at her to get her to hear. Made spending time with her less stressful.

That sounds like an inexpensive solution. I'm glad it worked for your mom.

Good to know if the need comes up.

Consumer and health groups have been advocating for this for years. However, as I said in my article, consumers need to do research to figure out what will work best for them and how to avoid unscrupulous sellers.