Home About Newsletter Categories Donate
Cars top the list of 2021 consumer complaints in a survey, again
Unfortunately, switching from Verizon to T-Mobile wasn’t as easy as I’d hoped 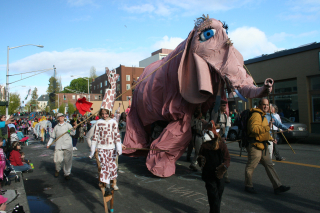 A friend wrote on Facebook that today is World Elephant Day. She works for the San Diego Zoo, and she posted photos from her first visit to Africa in 1988. She and her group were canoeing on the Zambezi River, following bull elephants along the shore. They were with a guide and got too close, so one elephant charged them.

Her photos are fantastic.

I checked my photo library, hoping to find a photo I’d taken of an elephant at a zoo. I couldn’t locate one, but I did find the above photo of an “elephant” in the Procession of the Species parade.

It’s important to be informed about and take action on the tragic loss of elephants that’s occurring.

Over the last decade, the number of elephants has dropped by 62 percent, and they could be mostly extinct by the end of the next decade, according to the website National Today.

World Elephant Day was created in 2012 by Patricia Sims and the Elephant Reintroduction Foundation of Thailand along with more than 100 elephant conservation organizations.