Home About Newsletter Categories Donate
Let the FTC know about the tricks and traps you’ve experienced at auto dealers by Sept. 12
Bloggers write about the past, present, and future

Did you know EPA allows sellers to put pesticide in your packages? 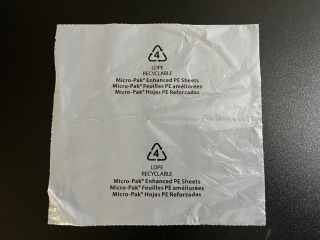 Recently, I received a package with a sheet of plastic in it that said “Micro-Pak Enhanced PE Sheets.” Wondering what it was, I saved it.

Micro-Pak Enhanced PE Sheets are intended to control, inhibit, and mitigate odor causing bacteria, mold, and mildew on products enclosed in packaging intended for shipment, according to an amended master label approved by the U.S. Environmental Protection Agency.

Micro-Pak stickers and sheets are activated by moisture, so they don’t start working until they’re needed, the Micro-Pak website states. When the relative humidity reaches a preset level, the sheets release a pesticide within the box or polybag to actively eliminate mold spores. The pesticide spreads throughout the package to do its work.

I couldn’t find any information on whether these sheets are dangerous for consumers to handle. I’ll contact the EPA and see what it says.

If you see these sheets in your packages, I’d put on disposable gloves and put of them in the trash right away.

I would certainly like to see the sheets labeled as containing pesticides. It's difficult to understand why they aren't labeled with that information.

The sheets are different from silica gel, a drying agent that comes in small, clear beads or rock crystals placed in little packets made of paper or cloth. The packets are put in products, such as food, clothing, medication, supplements, and electronics, to prevent moisture damage. The small particles can absorb large amounts of water. Silica gel is non-toxic, but it’s a choking hazard for young children when put in small packets.‌

Given how much influenced EPA is by the chemical industry and that EPA does NOT test pesticides before permitting temporary (or permanent registration) but relies on the chemical corporation's test results (or the commercial lab that does the testing), I think the precautions you've taken are wise and realistic.

You may need assistance from the offices of one of your Senators or Congressional Representative to get any information re: which pesticides are present on that sheet since it's very easy for whichever corporation manufactured that sheet to claim that the pesticide used is proprietary information (in manufacturing the sheet). It's how the tobacoo industry has avoided disclosure of all the many & various "ingredients" in cigarettes, et al, for years--except to the FDA and apparently the FDA can't disclose that information without permission. I don't know for sure that the proprietary information exception would apply, but generally people are just told, oh, it's "safe" if used properly. After all, that's what Bayer-Monsanto's claimed/claiming about Roundup & glysophate. Rarely a mention of the IBT scandal years ago. IBT was a lab often used to 'test' pesticides re: safety. Turned out IBT often didn't do the work it was supposed to do, but issued analytic reports re: "safety", etc. anyway. , EPA never required the corporations whose pesticides/herbicides hadn't been properly tested by IBT to provide accurate analysis/testing performed by a different lab before approving temporary or permanent registration, and worked w/Congress to exempt those chemicals from having to be retested/to continue registration. See pp. 134 to 198, A Bitter Fog: Herbicides and Human Rights, by Carol Van Strum, for a more in depth description of the IBT scandal and EPA's failure to protect the US public (and Canada's response--at the time, Canada generally relied upon US testing/EPA's actions).

Yes, it will be interesting to see what EPA has to say.

I didn't know about Carol Van Strum's book. I'll get it.