It’s a wonderful time of year. My garden is in full production.

I grew up on apple ranches in Central Washington. We always has a big garden. Nothing beats corn, green beans, and strawberries straight from the garden. 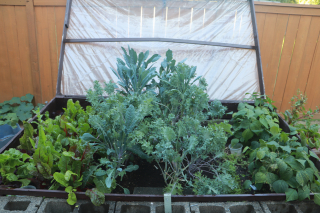 As usual, my raised bed garden is a great producer. As you can see from the photo, the kale and Swiss chard is doing well. For the first time, I had difficulty with carrots. I had to plant seeds three times. I may not get any before the snow flies. 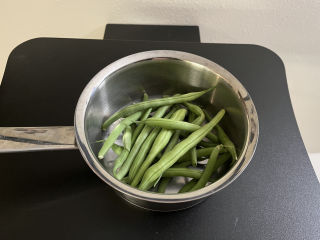 However, this year, I had problems, for the first time, with green beans. The slugs chomped up most of the ones I planted from seed. I had to buy a couple of sets of starts from the co-op. I’ve had a couple of big pickings and several smaller ones. That’s about half of what I usually have. 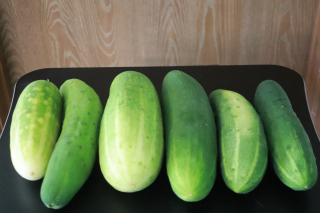 The cucumber crop is great as usual. I’m giving them away again. 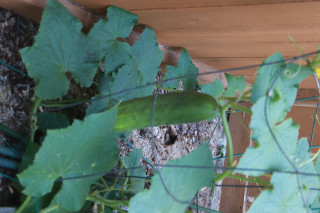 Here’s one that looked great growing up a tomato cage. 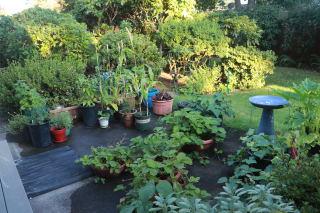 My patio garden produces well, too. I bought a strawberry pot, an impulse item. I wanted a large one, but I saw a small one at the co-op and got it. It’s pretty and interesting, but, in terms of production, it didn’t do much. 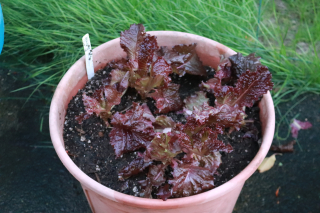 For lettuce, I figured that you need to plant it several times throughout the summer rather than planting a lot at once. I’ll be planting some today in hopes that it will be edible in about a month. I’ve tried growing kale and Swiss chard in a winter garden, but it hasn’t worked. It just stays the same size the entire winter, and then starts growing as it warms up in the spring. 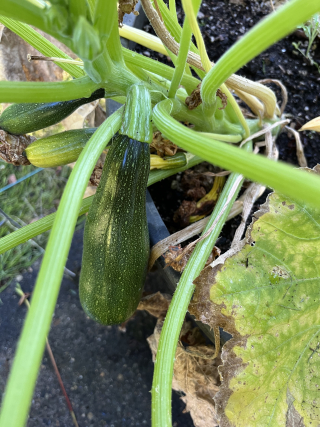 For zucchinis, it wasn’t a good year. People always joke about too many zucchinis, but in a lot of years I don’t get many. This was one of those years. I’ve had about three, with three more coming on. 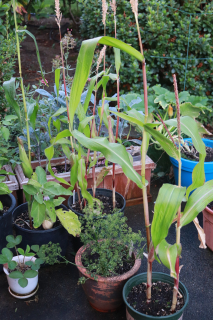 In the Seattle area, corn doesn’t grow that well. I grow a few stalks in my patio garden just to remind me of my parents’ gardens. Also, I use them for decorations for Halloween. 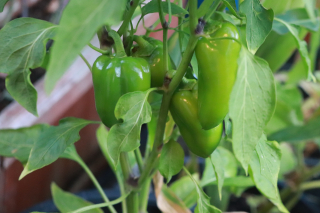 I also grow a few green peppers. My mom used to make stuffed green peppers. I found an easier recipe for Inside-Out Stuffed Peppers. Rather than stuffing the peppers, you chop them up and put them in layers with rice, hamburger, and stewed tomatoes then top with cheese. It’s terrific. 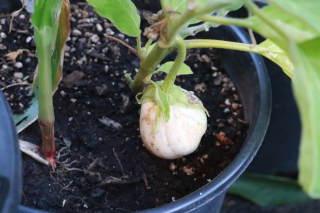 Although my mom made sautéed, sliced eggplant, they aren’t a favorite. I grow a few each year to remind me of the old days. However, my daughter Mona made baba ganoush from eggplants she grew in her garden in California. It was fabulous. 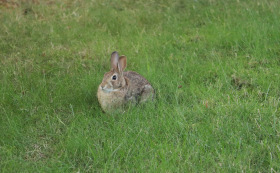 Like in previous years, I’ve had this visitor. It’s amazing. He stopped and looked at me. I went in, got my camera, and put on a telephone lens. When I went outside, he was still there – waiting for me and I got this photo. I took some old tomato cages that unfold and other garden supports to make a fence around three sides of the patio garden so the rabbit wouldn’t be nibbling my produce.

If you haven’t tried gardening yet, I’d highly recommend it. I love eating the produce, especially since I’ve just switched to a plant-based diet, and it’s good to get out into the yard and get some exercise. Sitting at the computer all day writing articles isn’t the best for one’s health. Also, every health plan recommends eating more vegetables for healthy living.

Wow. your garden is really beautiful.
The photo of the rabbit overwhelmed me with adorableness.

Thanks, Grace. I love gardening and hope to continue for many years. Hopefully, I can find someone who wants to help with the last set of cucumbers.