Tyson to pay $10.5 million for price-fixing in Washington state 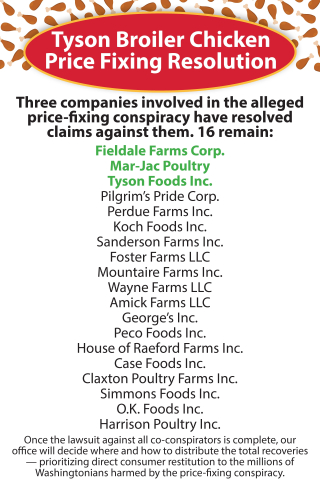 Recently, I wrote about how price-gouging by corporations is responsible for a third or more of the inflation consumers are experiencing these days.

Now, another instance of corporate wrongdoing that’s costing consumers millions has been exposed.

Tyson Foods, the largest chicken producer in the nation, will pay $10.5 million to settle a lawsuit from the Washington State Attorney General’s Office over price-fixing on chicken products.

It’s the third and largest resolution in state’s lawsuit against 19 chicken producers, Attorney General Bob Ferguson said in a statement Tuesday. The claims against the remaining 16 companies are continuing.

Tyson Foods is the largest chicken producer in the United States, with about 20 percent of the national market for chicken products.

Tyson Foods and 18 other chicken producers drove up the price of chicken since at least 2008, causing consumers to overpay by millions of dollars, the lawsuit alleges. The companies engaged in a conspiracy to inflate and manipulate prices, rig contract bids, illegally exchange information, and coordinate industry supply reductions to maximize profits.

In an example of the price-fixing, a former Tyson Foods sales representative said that he colluded with employees from three other chicken producers to make a “substantial pricing increase” in the chicken they sold to Kentucky Fried Chicken, Popeye’s, and Boston Market. The companies colluded down to the tenth of a penny per pound to ensure that their chicken brought each company the most profit, he said.

In another example of price-fixing, StarKist pleaded guilty in 2020 to criminal price fixing of packaged tuna in response to lawsuit by Ferguson’s office. A federal judge ordered StarKist to pay a $100 million penalty – the maximum allowed by law – for its role in the conspiracy.

These and other price-fixing lawsuits show the importance of  government agencies and elected officials that enforce consumer protection laws to expose law-breaking corporations and keep prices down for consumers.

Americans pay billions of dollars a year due to price fixing related to agricultural products, pharmaceuticals, airlines, food, and more.

U.S. Senator Elizabeth Warren (D-Mass.) asked the Department of Justice in February to take more aggressive action against corporations violating antitrust laws that hike prices for consumers. In a letter, Warren called out major poultry firms, big pharmaceutical companies, and other industries notorious for their price-fixing schemes that have received only ineffectual penalties for their criminal antitrust activity.

“The nation is dealing with inflation at its highest level in decades, much of it driven by corporate greed and anticompetitive behavior, and the federal government must use every tool available to prevent price gouging and reduce prices for Americans,” Warren said. “Antitrust policy plays a vital role in protecting consumers from anti-competitive practices that lead to higher prices, and no practice has a more direct effect on prices than price-fixing.”