Home About Newsletter Categories Donate
Having problems canceling a service? Check out these tips
More than half a million Black+Decker garment steamers are being recalled after consumers are burned

Be sure and vote in the midterm elections Nov. 8 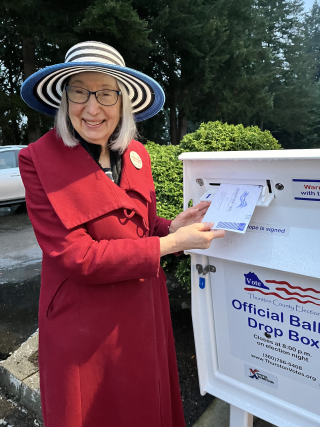 On Thursday, I put my ballot in a nearby drop box. Fortunately, there weren’t any Right-wing election deniers with guns standing nearby as has been reported in some areas of the country.

It’s really important for people to vote in the upcoming election. Right-wing fanatics are on the ballot in every state including running for secretary of state, the job in many states that oversees elections.

It’s so disappointing to me that Republicans have evolved into a party that needs to cheat and lie in order to win. Scurrilous ads, gerrymandering, and outright hate speech are now the norm for the party.

The Republican running against Sen. Patty Murry (D-Wash.) said in a TV ad that Patty Murry kept the border open and now crime is rampant, which is Murry’s fault. It’s a racist to say that people from Mexico and other immigrants are causing an increase in crime. It’s also untrue. And, to say that Patty Murry is keeping or has kept the border open in ludicrous. No one U.S. senator has that much power. Murry’s opponent, who shall not be named, must be banking on the fact that her target audience has never taken a class in civics and doesn’t know how government works.

And then, there’s abortion. Former President Trump, with the help of Senate Majority Leader Mitch McConnell, packed the U.S. Supreme Court with antiabortion judges. McConnell blocking a Obama nomination because it was too close to the election, then rushed through Amy Coney Barrett’s nomination days before an election is beyond outrageous. Again, more lying by Republicans. Brent Kavanaugh and Barrett called Roe v. Wade settled law. Then what? They quickly voted to overturn Roe v. Wade. They lied. It’s what most Republicans do.

About six in 10 Americans think abortion should be legal.

My opinion is that abortion should be rare and safe.

Unfortunately, abortion is often a financial decision. The latest research shows that it takes about $300,000 to raise a child to age 17.

The typical woman having an abortion is already a mother, is in her late 20s, has attended some college, has a low income, is unmarried, is in her first six weeks of pregnancy, and is having her first abortion, according to a New York Times article.

So, check your ballot to see which candidates support a woman’s right to choose. It’s important.

Then, there’s the economy. Republicans are gleefully jumping on high inflation and especially high gas prices.

What are the Republicans going to do about inflation if they get control of the U.S. House and Senate? They don’t have a plan, but in the run up to the midterms they continue only to rail on and on about high inflation.

Do you think the Republicans will do anything about price gouging, which makes up one third to half of inflation, if they get control of the House and Senate? Of course not.

In fact, the Republicans will rely on their what they usually do – reduce taxes for the rich and pay for it by cutting valuable government services, such as Medicare and Medicaid – again. That’s going to hurt those among the most vulnerable in the country.

And, contrary to popular belief, the economy is actually better under Democrats than Republicans.

A study by Princeton University economists Alan Blinder and Mark Watson found that the economy performs better when the president is a Democrat. They report that “by many measures, the performance gap is startlingly large.” Between presidents Truman and Obama, growth was 1.8 percent higher under Democrats than Republicans.

Let’s not forget school boards. The Right wants to take over school boards so they can defund public schools and in favor charter and religious schools. The Right has a long-term goal of privatizing public education.

Use your voter's guide to learn about school board candidates and check their websites to weed out fanatics.

So, be sure to vote Tuesday.

And, if you decide to vote for Republicans, be prepared for much unpleasantness – in your life through hate speech – and in your pocketbook.