Home About Newsletter Categories Donate
What are the best deals for Black Friday?
Facts and figures for Thanksgiving 2022 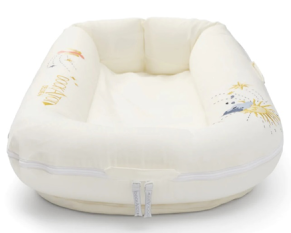 It’s important for parents, grandparents, and child care providers to keep up on the latest about infant loungers.

Just because a product, especially one for baby sleep, is being sold doesn’t mean it’s safe.

“It is unsafe for your baby to sleep in a DockATot Deluxe+; immediately discontinue its use,” CPSC Commissioner Richard Trumak said in a statement. “There are publicly available reports of infant deaths associated with the product.”

What’s going on with the infant loungers, formerly called sleepers, is confusing. The DockATot Deluxe+ is being sold on Target, eBay, DockATot, Bed Bath & Beyond, Nordstrom, and other websites. It costs $105 to $225. See the photo of the DockATot Deluxe+ above.

The agency found that the company imported the infant sleep product that was manufactured after June 23, 2022, and so it fails to meet the mandatory requirements of the ISP Rule.

Since there are infant loungers being sold that are dangerous, parents and others who care for children, need to be informed and alert.

Some consumer groups think no infant lounger should be allowed for sale regardless of manufacture date, and they should be removed from homes due to suffocation hazard.

“Products that don’t meet the CPSC’s Infant Sleep Product Rule but encourage parents to use them as loungers or for naps should not be available,” Nancy Cowles, executive director of Kids In Danger, a child product safety organization, said in a statement. “The very dangers products like these pose are the reason for the Infant Sleep Product Rule. Parents shouldn’t be fooled by a change in nomenclature from sleeper to lounger.”

KID and the Consumer Federation of America call on DockATot and the CPSC to immediately recall the loungers to prevent child injuries, and for the CPSC to recall all hazardous infant loungers.

In 2021, Boppy recalled 3.3 million loungers due to suffocation risk after eight reported child deaths. The CPSC issued a warning against Leachco loungers earlier this year after two reported deaths.

Babies sleep safest on their back, and on a firm, flat surface in a crib, bassinet, or play yard that meets a federal standard, with only a fitted sheet. Other products such as crib bumper pads, pillows, blankets, or other items shouldn’t be in the child’s sleep area.