One in three Americans overspent during the holidays, survey finds 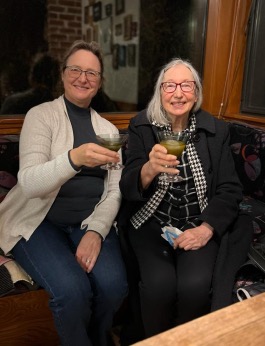 How was your holiday? Did you get lots of neat presents? Were you able to celebrate with family and friends? Were you exhausted when it was all over?

I was fortunate because I was able to celebrate Christmas twice. My daughter from Spain came for an early celebration and my daughter from Sacramento drove up to Washington state for the early festivities, too.

We had a great time including lots of wonderful food and presents and a great turkey dinner.

Then, when Lisa went home, I flew to California to have a second Christmas with Mona and her family on the farm east of Sacramento.

It, too, was great, especially with cocktails, two free Christmas trees, and a smoked turkey.

However, Southwest Airlines added an unplanned wrinkle to the festivities. Read all about at “If Your Flight Is Canceled by the Airlines, Ask for a Refund” and “Travel Tip: Don’t Put Your Laptop in Your Checked Luggage.”

I didn’t spend more than I usually do on the holidays because I didn’t go to Madrid. I’m not ready to travel yet for nine hours in airplanes where hardly anyone is wearing a mask.

More than one in three Americans overspent during the holidays, according to WalletHub’s annual “Post-Holiday Shopping Survey.” WalletHub is a personal finance website.

Consumers likely added about $80 billion in credit card debt during the fourth quarter of 2022, said Jill Gonzalez, a WalletHub analyst.

“Overspending during the holidays is not a new phenomenon, as the final few months of the year are when we typically rack up the most credit card debt, but consumers seem increasingly comfortable borrowing money to fuel holiday festivities,” Gonzalez said. “Roughly 23 percent of people say it’s worth going into debt for the holidays, per WalletHub’s survey.”

Other findings from the survey are:

Scams: 23 percent of Americans encountered scams while trying to do their holiday shopping.

Interest rates: The average annual percentage rate or APR among credit card offers for people with good credit increased from 18.98 percent in 2021 to 22.5 percent in 2022.

So, best wishes to us all in 2023. Since the economy is so uncertain, be sure to have an adequate emergency fund, review your budget, and save as much money as you can.

I used to put myself in a lot of credit card debt for the holidays. Now the most expensive thing I buy in December is the meal we have. I buy Christmas and birthday gifts throughout the year and stuff them in a closet. Each time I see a clearance aisle in a store, I go down it. I've found some pretty great gifts there, too. Most of the time I don't even understand why something is on clearance but I consider myself lucky and buy it!

Credit cards are always tempting. My husband and I have a policy to pay off the entire credit at the end of the month. That way, we never have to pay interest, enjoy the credit to the fullest and earn points.

My family made a vow to have a very frugal Christmas with presents. I'm glad we did. I guess it's easier now since we're all adults and on budgets.

Debt is such a bad idea. It just is.

I like Jennifer's idea of buying presents through the year on sale. And Carol, I couldn't agree with you more -- debt is such a bad idea.

I got stuck with debt from major car repairs and ill pets. Not something I enjoyed spending money on. Waiting to win the Lotto if I actually played it. LOL

Jennifer, getting stuck from debt is so stressful. I hope you can get it paid off soon and start an emergency fund.