Next week we’ll have Halloween, then a few days later, it’s finally Election Day. Halloween can be spooky. Let’s hope the election isn’t. Meanwhile, bloggers in our blogging group continue to write informative, thoughtful articles. They include: Read more →

Twenty-four toxic ingredients, including mercury and formaldehyde, are now banned from cosmetics and personal care products in California. Gov. Gavin Newsom signed the Toxic-Free Cosmetics Act on Wednesday. These ingredients are prohibited in cosmetics and personal care products in the European Union and other countries, but are still used in the U.S. Read more → 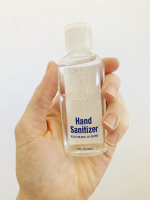 Despite U.S. PIRG Education Fund calling out Amazon and other online retailers for allowing price gouging in their online websites at the beginning of the coronavirus pandemic, a new analysis shows that the problem is still serious. Six months later, U.S. PIRG revisited whether Amazon had lived up to its promise of tackling price gouging. Read more →

Baby boomers venturing out some into the new pandemic world 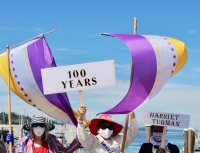 These days, I’m still not going out much. I pick up groceries from my local food coop weekly and order everything else. However, we’re having socially distance, outdoor events to celebrate the ratification of the 19th Amendment, which guaranteed women the right to vote. It was ratified 100 years ago on Aug. 18, 1920, when Tennessee became the 36th state to approve votes for women. I’m photographing the events, four so far with the fifth and sixth, the final ones, tomorrow. Meanwhile, boomer bloggers are writing about what’s happening in their lives these days: Read more →

Pandemic still changing everything, but people are trying a few things

On Aug. 18, 1920, Tennessee legislators voted to ratify the 19th amendment to the U.S. Constitution guaranteeing the right for women to vote. It was the largest granting of suffrage in the history of the United States. As with the cancelation of everything else, events to celebrate the 100th anniversary of women’s suffrage were canceled. However, on the 100th anniversary of the Tennessee General Assembly’s vote, women in my community gathered at a the state library next to a statue of Mark Twain to celebrate. Mark Twain said women should have the right to vote. It was fun to celebrate such a joyous occasion. Read more →

Facts and figures for Father’s Day 2020

The first Mother's Day was celebrated in 1914, but a holiday honoring fathers didn’t become official until 1966, when President Lyndon Johnson declared that the third Sunday in June would be Father's Day. President Richard Nixon made this proclamation permanent in 1972. However, Father’s Day was celebrated before then. The idea for Father's Day is attributed to Sonora Dodd, who was raised by her father after her mother's death during childbirth. While listening to a sermon at church on Mother's Day, she thought about all her father had done for her and her siblings and decided fathers should have a day, too. Because Dodd's father was born in June, she encouraged churches in her area, Spokane, Washington, to honor fathers that month. The first Father's Day was celebrated in Spokane in 1910. Over the years, the idea spread, and people lobbied Congress to establish the holiday. Shopping This year three-quarters of consumers say they plan to celebrate Father's Day, according to the annual survey conducted for the National Retail Federation. Read more →

If you’re going to leave your home and go outside, remember to protect your skin from the sun’s rays. To help consumers select a sunscreen, the Environmental Working Group has released its 14th annual “Guide to Sunscreens.” Researchers rated the safety and effectiveness of more than 1,300 SPF products – including sunscreens, moisturizers, and lip balms – and found that only 25 percent offer adequate protection and don’t contain worrisome ingredients such as oxybenzone, a potential hormone-disrupting chemical that’s readily absorbed by the body. Despite a delay in finalizing rules that would make all sunscreens on U.S. store shelves safer, the U.S. Food and Drug Administration is completing tests that highlight concerns with common sunscreen ingredients. Last year, the agency published two studies showing that, with just a single application, six chemical active ingredients, including oxybenzone, are readily absorbed through the skin and could be detected in bodies at levels that could cause harm. Read more →

Things are going well for me as I stay home under Washington state’s stay home order. I’m willing to do it for a long time more. I don’t think it’s worth it to get my hair cut or eat in a restaurant and get the coronavirus. It’s so upsetting that protesters are risking the lives of others by coming out to state capitals, crowding together, and in some states, even carrying guns. My yard is beautiful this time of year. I have 40 rhododendrons in many colors of pink plus red, yellow, orangey, and purple. I’m making a bouquet a day because the beautiful blossoms will soon be gone. Since my main interest in my yard is growing vegetables, I rely on all the rhododendrons, and about a dozen azaleas, planted by previous owners. Read more →